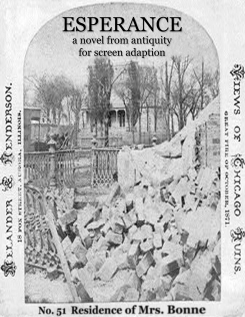 Genre: - a novel from antiquity for screen adaption -

The widowed centenarian Mrs. Bonne and her elderly single daughter are the beneficent powerful Christian matriarchs at the center of a struggle for the soul of their beloved nineteenth-century American town-turned-city, Esperance. They care for its inhabitants as if they were their own children, and are determined to protect them from the corrupting influences of the Sixth Ward, where liquor and its associated vices threaten the common decency that was the heart of their once peaceful, stable town. They enlist the aid of journalist and labor agitator Charles Seaman to help them “slay the Dragon” of unethical and immoral behavior. This historically accurate period piece is equal parts political intrigue and spiritual awakening, a masterful handling of the sprawling cast of characters whose interactions paint the broad picture of a town becoming a city, a tale of greed and growth versus good and grounded as resonant now as it was when so eloquently penned a century ago. It offers an authoritative, sophisticated dual performance to a seasoned actress playing both Mrs. Bonnes. (Hollywood Pitch)